My first stop was Penang, a city in Northwest Malaysia that was the historic capital of the British Straits Settlement. I was staying in the old town center, which was an interesting mix of European colonial buildings and a population that's evenly Chinese/Indian/Malay. Since it's a port city, it has some beautiful waterfronts. 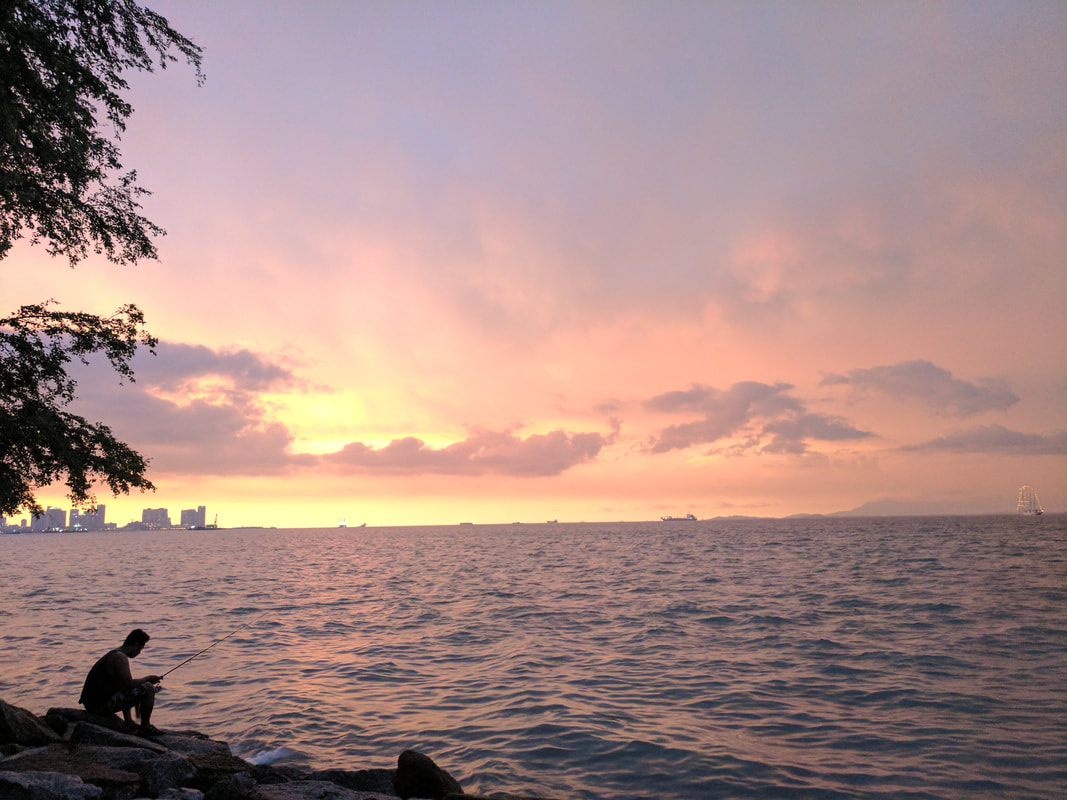 The Malacca Straits from Penang, Malaysia
I spent a few days in Penang before catching a bus to Kuala Lumpur, or KL as it's affectionately known. KL was very modern and after relying on semi-rundown buses Penang, it was really nice to be able to take a clean and modern metro to get around town.

Downtown KL gets quite clogged in traffic during rush hours, and so some VIPs rely on a helipad on top of a building to get into and out of the city center. In the evenings though, the helipad is converted into an open air lounge. So after a long day of exploring temples and caves, it was nice to return to urban life for a bit and have a drink with my travel buddies.
KL was unfortunately the last stop in Malaysia. I visited family in India for a few days and then headed over to Korea. ​

A friend of mine from college lived in Seoul and showed me around for a couple days. Although Seoul is a huge city, it was nice to be in a place that was orderly - unlike India or Malaysia, you could cross the street without worrying about cars being crazy.

I decided to go see the Demilitarized Zone separating North Korea from South Korea. That was a totally fascinating experience. You were required to book a tour, coordinated by the US Military. They take you to hidden underground tunnels built by the North, an active South Korean military observation point monitoring North Korean activity, and to the actual negotiation and armistice room that actively maintains peace on the peninsula.
​Bizarrely enough, all the American/South Korean soldiers in the DMZ area are now required to wear sunglasses, at all times, even indoors. The reason? A few months ago the North Koreans started complaining that the Americans were using "provocative and aggressive" eye brow gestures. A bit ridiculous coming from a country that's literally building nuclear weapons if you ask me.

After Seoul, I headed to the southern coast to Busan, a beach town and the country's second largest city. It's a photogenic place!
I spent a few days relaxing in Busan and then caught a bus to Gyeongju, the historic capital of the Silla dynasty that ruled Korea in the seventh, eighth, and ninth centuries. Gyeongju gets relatively fewer non-Asian tourists than Seoul and Busan.  I stuck out like a sore thumb, but that led to a few fun episodes. At one point, my travel buddies and I were stopped by police. After initially panicking, the cop explained in very basic English that she hadn't seen foreigners here before and wanted a photo with us. 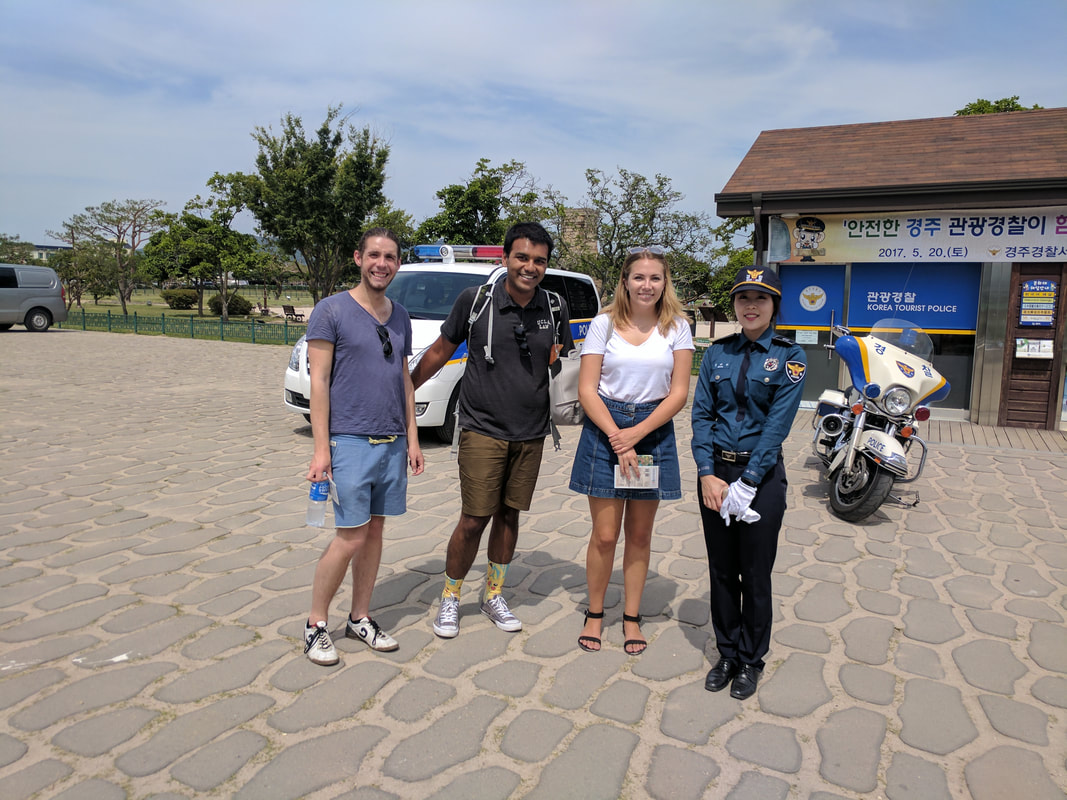 This pattern continued! We later went to check out a temple in town and there happened to be a wedding taking place. Instead of kicking us, the bride and groom's families invited us to attend the wedding. Whatever else I had been expecting in Korea, attending a wedding was not part of the plan!
Overall, Korea was a really fun place to visit. Tons of history, super friendly people, and very easy to get around with public transport.

So I decided to try something a bit more challenging!

I spent six weeks total in China and started with a trip from Beijing to the Great Wall. The Great Wall spans across almost the entirety of the country. The wall is actually accessible via the Beijing subway, but that area tends to be very crowded.

Instead, I took a bus for three hours heading Northeast from Beijing and got to a part of the wall better known for its hiking and its views. We spent about three hours hiking along wall, crossing ten posts. The 100 degree weather made the hike challenging, but the payoff was having the entire wall to ourselves for some fun photos. 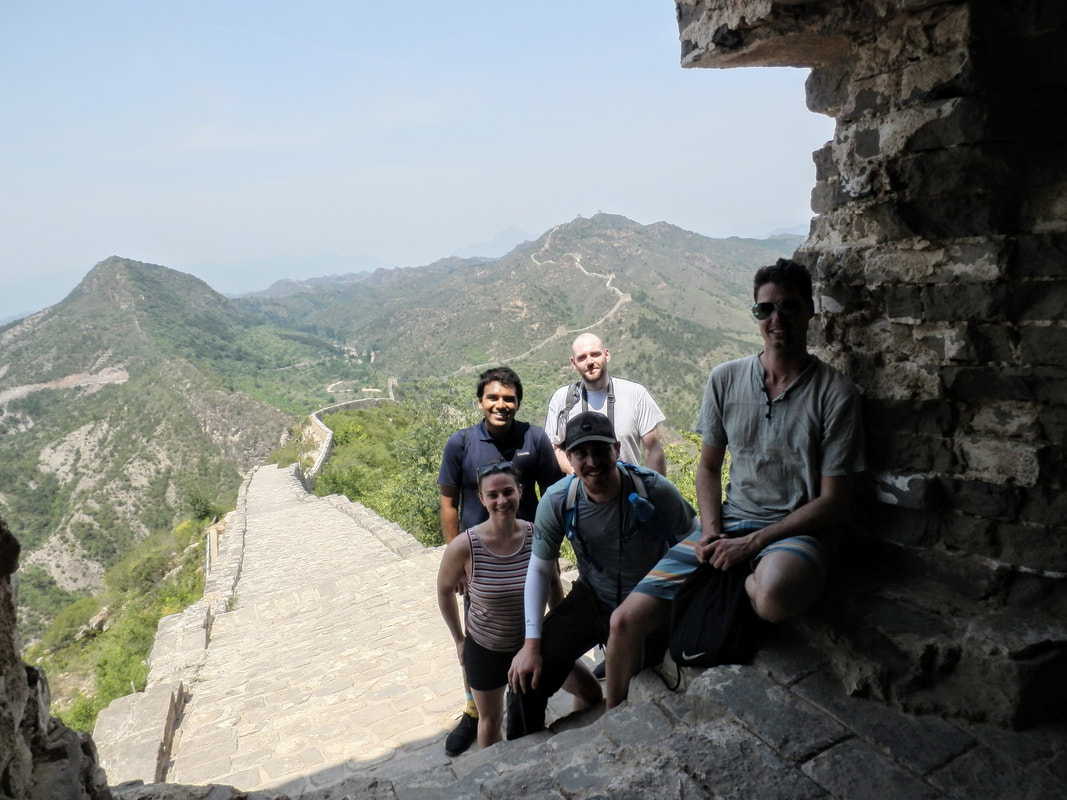 100 degree hike survivors from the UK, Canada, Australia, and Belgium
I spent nearly a week in Beijing in total, visiting everything from Tienanmen Square to the Forbidden City. The city itself is immense and widely spread out so you rarely feel crowded despite the tens of millions of people who live there. The pollution and smog issue there is very real though. On my fourth day there, I realized I had not seen blue sky since arriving.

The next major stop after Beijing was Xi'an (pronounced 'she-anne'), the capital of ancient imperial China and the Eastern terminus of the Silk Road. I took an overnight sleeper train there and was really excited to see the Terra Cotta Warriors. There were several excavated tombs in the area (with more being discovered regularly), the largest of which is below and contains nearly 2000 unique statue soldiers. While no one knows for sure, one of the prevailing theories on why they were constructed was that the Emperor genuinely believed that his reign on Earth would continue in the afterlife.
Buses and overnight trains were my primary means of transportation from getting from one city to the next. It was pretty common to see university students and young professionals on these trains as well. While most did not speak very much English, we were able to chat, on occasions for several hours, via translator apps on our phones. Typically, I'd type my question or statement into my phone, display the corresponding Chinese characters on my phone, and show my phone to the individuals with whom I was trying to communicate.

It was a practical, if slightly ridiculous, way to get around. It was also incredibly amusing to a number of Chinese people that I met, some of whom were so amused that they invited me to join them in their home cities. It was really cool to get a home cooked meal or local-guided tour from someone I had met within the last twenty-four hours. It was also pretty common to have random people run up to you on the street and ask (typically via hand gestures) for a photo. I usually allowed that, but you'd periodically get people trying to secretly take photos - which seems quite impolite!
I spent some time in Chengdu, the capital of Sichuan Province and home of China's pandas. I woke up early to see the pandas since they tend to eat in the morning, and sleep the rest of the day. The pandas are hilariously lazy. I watched one eat bamboo and leave the bark on his chest until his chest was full, only to stand up, let the bark fall down, then sit back down one foot to the right and continue eating.

I also had a chance to see a few of the cubs up close. The older pandas are more loners, but the cubs played together quite a bit.
Okay, last story! I got as far West in China as Lijiang, in Yunnan Province (near the TIbet and Myanmar borders). Lijiang is a pretty city with a well-preserved city center in its own right, but is the launching off point for the Tiger Leaping Gorge, China's best hike. The hike itself is a two-to-three day hike through the mountains of Yunnan Province.

I took a bus to the trailhead and was a bit nervous because I didn't know anyone else planning to do the hike at the same time and tackling a two day hike solo seemed like a bad idea. Fortunately, the other people crazy enough to do it were really nice and we got to know one another pretty well over the course of the hike, especially the steep uphill climbs. After an early start, we got almost 60% through the trail and spent the night at Halfway House, a hostel on the trek from which we had an eye-level view of the passing clouds.
All in all, I'm really happy I was able to explore China in depth and am looking forward to getting back to the real world with a new set of stories to share!

Hope you're all doing great!